This is a time of paradox in our lives. For all of us, in the United States and around the globe, it is a season of hope—for change and for a better day to come. The recent election, though not the ultimate victory over our tragic past, has moved us many steps closer to the beloved kingdom that, each in his or her own way, we all seek.

Yet this is also a time of near-despair. Our livelihoods and ways of living are under threat, not only from economic collapse, but also from the prospect that our planet itself, the underpinning of our very existence, may break down. We are living with hope. And we are also living with despair.

This is the paradox of our time. Yet the tension between opposites—between hope and despair, joy and sadness, even good and evil—can be a creative force in our lives and in the world. That is why this is also a time of great possibility. As individuals, as a nation, and as a global people, we can still create our future. Fear tells us we must find new ways to live with each other and with the earth; hope tells us that we can.

We have already begun. This year, let us celebrate that fact and draw strength for the future from it.
Posted by rasphila at 9:00 AM No comments:

Just over two years ago, I posted a three-part series on a proposal to build a ten-story parking lot (instead of the originally proposed condominium) in the heart of Philadelphia's downtown. The series can be found at "Design for What," Part I; Part II; and Part III.

In the intervening two years, the developer has found enough tenants to justify building the full condominium, and the building's exterior is nearly complete. While this outcome does little to address other issues discussed in the post, such as creating jobs in the city and the proliferation of parking lots, it is at least better than a parking garage, however "beautiful" (the developer's term when making the proposal). 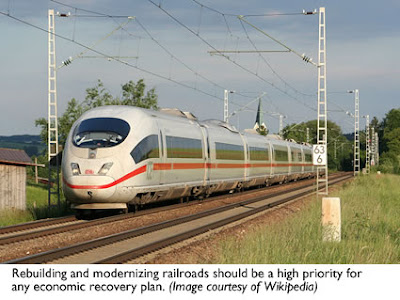 Rebuild the Railroads: The United States was once the leader in developing railroads. Now, as its rail system has been allowed to decay, it has fallen far behind other developed countries and some, like China, that are still emerging. Environmentally and strategically this makes no sense. Rail transport is the most efficient way to move freight, far more efficient than trucking goods or flying them. With better track and rolling stock, freight hauling by rail would be competitive with trucking—as it has to be if we are to cut greenhouse gas emissions and become less dependent on imported fuel.

Make Passenger Rail Competitive: For those seeking alternatives to driving or flying, passenger rail is frequently not an option. Trains are infrequent, sometimes more costly, and often much slower than they could be with improved track and rolling stock. As with freight, rail is the most efficient way to move passengers. It makes little sense to continue policies that encourage air travel, or even driving, when investing in passenger rail—even subsidizing it—would save fuel and cut emissions.

Connect the Dots: Fuel prices, although temporarily in retreat, will not remain low indefinitely. The supply of oil for making gasoline is finite, and the cost of extracting it will go up, not down, in the future. Over time, this will doom the U.S. suburbs to—depending on who is talking—decline or collapse. The suburbs may be, as James Howard Kunstler maintains, the worst misallocation of funds in recent memory; but they are there, and people live in them. The best way to make them viable again is to connect them with rapid, efficient public transport—light rail for preference, or low-emission buses.

Create Walkability: Walkable neighborhoods are in vogue for good reason. They are the future, if we are to have one. In the long term, it would make sense to give businesses incentives to build stores within walking distance (or easy public transport distance) of the dots which the infrastructure package has just connected. This would make it easier for us to lower our dependence on the private car, and hence lower emissions and dependence on imported fuel.

All of these items would cost money—as would other components of any stimulus package worth doing. But unlike simply repairing roads and bridges, however much they need repair, these suggestions would build for a future of high fuel prices and environmental constraints. That, after all, is the future that we face.

Coordinate Electric Cars and Public Transport: Commentator Lorcan suggests that roads should be made electric-car ready so that rail passengers could take the train to a depot or station, then pick up an electric car for the trip to their final destination. This imaginative suggestion echos Israeli architect and planner Moshe Safdie's concept of the utility car, which would be available for short trips at transit points like train stations. His book, The City After the Automobile, repays study. By making roads electric-car ready, I assume Lorcan means adding electric car battery-charging stations at intervals on the roads—also a fine suggestion.

The larger issue here is whether we can coordinate our transportation system to encourage users to take the most efficient transport mode for their journey. A future post will address this question.