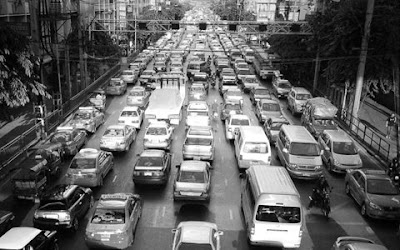 The City Fix, an excellent web site on urban issues, reports that the worst automobile traffic in the world is in Bangkok, Thailand. In a world that includes Los Angeles, Houston, Mumbai, and Peking, this comes as somewhat of a surprise. But it probably should not. According to the report, the Bangkok authorities have made the situation even worse by, in effect, subordinating all planning and design to traffic movement—a policy which has backfired in at least one respect. To make room for more roads, the authorities covered the city's canals with concrete. Since the canals served not only as transportation routes, but as reservoirs for rainwater (which Bangkok gets in abundance), the loss of the canals has led to greatly increased flooding. This in turn increases congestion and slows down traffic.

Traffic in Bangkok is so bad that "'hundreds of women over the past few years have been forced to give birth in cars.' Police are now trained in midwifery" as a matter of routine. Productivity has suffered greatly—even more than in car-centric cities like Los Angeles, where traffic delays of more than an hour are routine.

Anyone who wants to see the future without congestion controls, it appears, has only to look at Bangkok. It is not a pretty sight.
Posted by rasphila at 3:31 PM 2 comments: