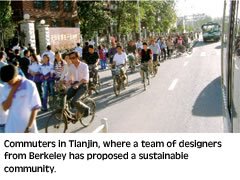 Yesterday's posting described Orange County, China, a residential development that replicates an American suburb. In fairness to the Chinese, I should also point out that a team of environmental designers from Berkeley has recently proposed a far more sustainable form of development which, if adopted, bodes well for the future of China and could provide a model for other places. The full story is found in Unforbidden Cities, by Harrison Fraker, Jr.

The proposed community includes
The central discovery in this project was the potential of "whole system design":

As the project progressed, the Berkeley team became more and more excited by the potential for the whole system design concept to be a real breakthrough, to be a reproducible model for sustainable development throughout China and the developing world. The buildings are platforms for producing energy from renewable sources such as wind and sun. Sewage is not treated and dumped, but processed into energy, fertilizer, and water for irrigation. The landscape is more than eye pleasing; it is a multi-functional contributor to the systems. There is little or no waste, and all energy is generated on site. Most importantly, the neighborhood becomes essentially a self-sufficient unit, a circular system. It does not require the construction of expensive new power plants, new sewage treatment and water supply outside the system.

This approach to community development, however, had its downside as well.

The new design requires a radical transformation in the development process. In addition to constructing housing units, the developer has to build a comprehensive, on-site utility system of energy production, water supply, and sewage treatment, which is beyond the developer's traditional scope of work. It requires getting approvals through government agencies that are narrowly proscribed and not accustomed to thinking across their jurisdictions. Most importantly, it requires design and construction professionals to share responsibility and to work collaboratively, to which they are unaccustomed. It requires paying 15 to 20 percent of the costs up front. Even though the life cycle costs are significantly less than the cost of constructing new centralized utilities, the question becomes: Who owns, operates, and maintains the system, and how are they compensated for the service? Some models exist for funding and operating on site systems, but none is as comprehensive and integrated as the one proposed.

Despite these potential problems, the Fraker team's approach offers an alternative for community design—not just in China and the developing world, but in the advanced economies. It will be interesting to see whether it is widely adopted in China.
Posted by rasphila at 12:59 PM No comments: 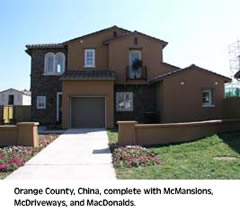 The suburbs have become controversial in the United States. Critics point to their many downsides: they create sprawl, use land unwisely, and are almost completely dependent on private cars and cheap gasoline for liveability. They are not really neighborhoods because the houses are too far apart and the shops are miles away in shopping centers and big box stores.

Defenders of the suburbs point to their popularity—an argument which is undeniably true but beside the point. In a world of climate change and limited resources, we can't forever expand, build on farmland, and drive everywhere. And we have to start putting essential services within walking distance of where we live. Already many communities have passed anti-sprawl ordnances, and Portland, Oregon, has become the first major city to make a serious effort to control sprawl. Very gradually, we are relearning the value of cities and the importance of open countryside. Too gradually, some would say—but we are learning. And the automobile-driven suburb is less and less the solution and more and part of the problem. It is, at least, losing some of its cachet.

Not so in China, where new residents recently celebrated the opening of Orange County, an almost perfect replica of a U.S. MacSuburb. In one of the most crowded countries on earth, the houses sprawl over enormous lots. In a country that is already seeing pollution numbers skyrocket, residents will be entirely dependent on cars to get around.

These are nice houses, considered individually. But as a development, Orange County looks pretty disheartening to an outside observer. It is precisely the sort of community that we can't afford any longer, in many ways.

In fairness to the Chinese, Orange County is a kind of theme park: like previous developments that replicated English and French villages, it is a copy of a "typical" American neighborhood. But the differences between Orange County and an English village are palpable and telling.

An English village, for all its faults, is a genuine community. It has neighborhood gathering places; people actually know each other, sometimes in more detail than is entirely comfortable; and you can walk to the shops.

An American MacSuburb, by contrast, is a collection of houses on big plots of land. The neighborhood gathering place is likely to be the mall; people may or may not know each other—in fact, may not see each other on weekdays at all; and the shops are miles away in the neighborhood mall and big box stores.

To an outside observer, a place like Orange County seems more a curiousity than a threat. It is far less dangerous than the Chinese passion for the automobile and the Chinese commitment to coal-fired electricity generation. But it's sad that, when Orange County's developer was seeking the typically American, he or she settled on a subdivision full of expensive MacMansions. That says a lot, and none of it very good, about the American way of life.
Posted by rasphila at 9:40 AM No comments:

A Creative Idea from England

One proposal to control greenhouse gas emissions—individual carbon ration cards—is already part of the public discussion in England. New Statesman environmental writer Mark Lynas suggests that, as a kind of domestic cap-and-trade system, carbon cards should appeal both to the left and to the right: to the left, because they should help cut carbon emissions without hurting the poor as much as increased fuel taxes; to the right, because they could create a free market in carbon points while controlling emissions. Polly Toynbee, writing in the Guardian, suggests that carbon cards for transportation could be implemented quickly, although carbon cards for overall fuel usage (e.g., for heating and cooking) would take longer to set up.

The idea is simple and could probably be administered through the tax system:
Rationing has a bad name both in England and in other places, and especially in the United States. But carbon rationing on this model would be less problematic in many ways than proposals like high fuel taxes.

Fuel taxes, which are designed to increase fuel prices and discourage consumption, have two major flaws:
Carbon rationing avoids the second of these problems. By careful use of their share, low-income families might even make money from rationing (so could high-income families if they wished). Carbon cards would reward fuel users for efficiency, not punish them for buying the fuel they do use.

As to the politics of carbon cards, the situation would not be simple. No one likes to be told that there are limits to their ability to do what they wish. But in fact, in the future, there will be limits. The central question is not whether limits will exist, but how to implement them. Carbon cards are one idea that is worth considering.
Posted by rasphila at 1:57 PM No comments: