No Place for Walkers 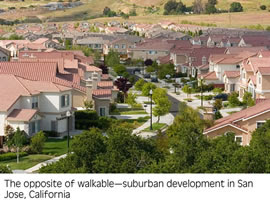 There are a lot of things to dislike about the American suburbs. There is no streetscape; the houses all look similar; the houses are too big and cheaply built. Suburban planning and design, which assume abundant cheap fuel and no climate change, are among the more important causes of the outlandish American carbon footprint.

But the most annoying problem with the suburbs is simpler to state and harder to remedy: there is no place to walk. Often there are not even sidewalks, as if walking was actively discouraged. Perhaps it is.

A new web site, walkscore.com, shows just how difficult it is to walk in the suburbs. The walkscore calculations are imperfect in some respects, and the maps are sometimes out of date. But the walkability scores that the site generates ring true. To get a score, the user types in an address. The site then calculates the score based on how close the address is to shopping, libraries, fitness centers, and other services. On a scale of 100, anything above 70 is considered walkable. 50-70 is borderline. A score below 50 means that a car is a practical necessity, and there is nowhere to walk—at least not if you want to use local services.

My own experiment with walking scores, while not systematic, was enlightening. I ran scores on addresses from Philadelphia, some Philadelphia suburbs, and some other suburbs where friends and family live. Here, in descending order of scores, are the results:

This is all very unscientific and unsystematic, but it is no surprise. Anyone who has lived in or visited the suburbs knows they are not walkable. And anyone who looks at the cost of fuel and the climate change numbers knows that the suburbs are also unsustainable.

Allison Arieff on Housing and Community

Allison Arieff's latest posting in her blog for the New York Times ("Is Your House Making You Look Fat?") is a sharply-written essay on how to design houses for lower environmental impact, greater sense of community, and better health for those who live in them.

Posted by rasphila at 3:37 PM No comments:

Biofuels—A Greater Hazard Than We Thought 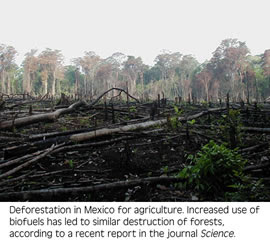 Biofuels from corn and other crops, which were supposed to be the silver bullet that would fuel cars without affecting climate change, are actually a worse source of greenhouse gases than fossil fuels, according to a report in the New York Times. Two recent studies published in the journal Science looked at the overall greenhouse gas effect of biofuels—including emissions from the production process, the consequences of land clearance to grow crops for use as fuel, and other factors. They concluded that production and burning of fossil fuels was less harmful to the earth's climate than production and burning of biomass fuels.

These two studies add to the already-strong case against increasing our use of biofuels. In addition to their overall effect on the environment, fuels derived from food crops have raised the price of food and hurt farmers in some developing countries. (See the summary in a recent issue of Sojourners.) And their other environmental and social effects—particularly destruction of forests which are the homes of many plant and animal species, including humans—hardly bear thinking about.

Biofuels have long been promoted as one answer to many problems, not just climate change. But on closer inspection, their virtues turn out to be far less than their supporters claim.

In the end, the claims for biofuels seem at least poorly supported. The truth is that we cannot grow enough biomass crops to fuel the world's transportation fleet. An increased emphasis on biofuels, as in recent action by Congress mandating their greater use, is no substitute for finding ways to get from place to place more efficiently. One can't, for example, make a private automobile more efficient than a train simply by changing its fuel. Gallon for gallon, the train will always use fuel more efficiently.

We cannot just slot in biomass fuels and keep driving everywhere. In the long run, the planet will not support it.