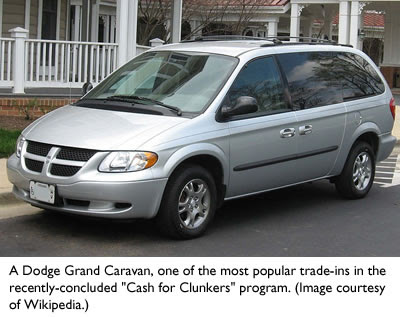 Buildings and transportation are the sectors of the U.S. economy that generate the most greenhouse gases. Refitting our houses, public buildings, and neighborhoods to make them sustainable will take time. It will create new industries and jobs, but it is a long-term, not a short-term solution.

Transportation is both a long-term and a short-term problem. The Cash for Clunkers program, which recently concluded, was touted partly as a way to cut fuel use, and therefore greenhouse gases. Most reports showed that it effectively cleared auto dealers' inventory but did little for fuel use or the environment.

Cash for Clunkers was a camel—a horse designed by a committee—but it is not too late for other ideas that could, if implemented, have more impact on fuel use and greenhouse gas emissions.

Herewith, three such ideas. They are simple in principle and easy to understand. They would help lower fuel use and emissions. They are not, however, camels, and because they are not, they may never make it through Congress. I present them in the order of likelihood.

In the long run, cutting fuel usage and emissions will become so important that, if we don't find alternatives based on incentives and attractive voluntary programs, we will almost certainly have to resort to rationing in some form. Starting now, with programs that encourage economy without coercing it, is the best way to go in a free society. Whether Congress and state legislatures will see that is quite another matter. One can only hope.
Posted by rasphila at 9:50 AM No comments:

Cash for Clunkers: Not Very Green 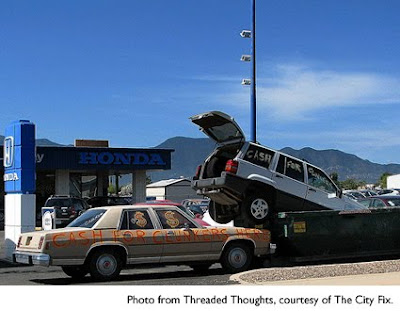 The City Fix has a good roundup of reporting on the environmental effects of the popular "Cash for Clunkers" program. The conclusion? That the program will have little or no effect on overall emissions.

The clearest presentation of the arguments is in a Washington Post article by Lee Schipper, founder of EMBARQ, and his colleagues.

On the evidence so far, the program is helping car dealerships a lot. The environment, not so much.