The Price of Coal 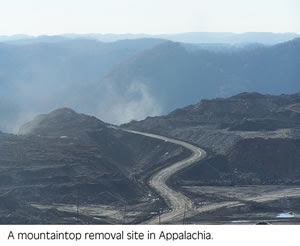 Coal-fired plants are a primary source of electricity in the United States, China, and many other countries. There are proposals in the U.S., including one in Pennsylvania, to manufacture liquid fuel from coal because there is a lot of coal in the ground, and synthetic fuels would lower U.S. dependence on Middle East oil.

Coal, that is, is central to industrial society as we now know it. But it comes with costs. It is a major source of greenhouse gases, soot, and smoke. Coal mining—the traditional underground sort of mining—is one of the most dangerous professions on earth. These are among the costs of coal.

There is another price we pay for our coal: the destruction of some of our most beautiful and precious mountains and the culture of the people who live in them. The people of Appalachia have long suffered more than their share of poverty. Now they also suffer, even more than in the heyday of "strip mining" (removal of the earth above a coal seam), from environmental ruin. The method of this devastation is called mountaintop removal. It is, according to the mining companies, more efficient and safer than underground mining. What they fail to mention is what it does to the hills, the valleys, the watersheds, and the people who must live next to mountains whose tops have been blown off.

A detailed description of mountaintop removal and its effects is at ilovemountains.org. When a mining company blows off the top of a mountain to get at the coal beneath, the debris from the explosion must go somewhere—and "somewhere" usually means into the valleys below. This disrupts watersheds that have existed since long before there were humans in those valleys. It leads to flooding, destruction of property and roads, and huge economic costs in a region that is already poor. (Little or none of the proceeds from mountaintop removal find their way back to those same valleys.)

To environmental and economic costs, we can add spiritual and aesthetic ones. Mountain people may not have a great deal of money, but because of the beauty of the mountains they are seldom poor in spirit. Mountaintop removal destroys that beauty—a loss which is in some ways more painful than any economic cost.

All this because we have not found a substitute for coal to feed our appetite for power. And because we have assumed that the cost of energy is what we see in our electric bill. It is not. In the long run, the price of coal as we now extract and use it is too high to pay.
Posted by rasphila at 2:45 PM No comments:

Wagering on the Future 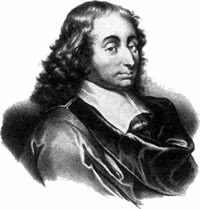 The French mathematician Blaise Pascal suggested in his Pensees that believing in God is a better "bet" than not believing. This is Pascal's Wager, which

As an argument for religious belief, Pascal's Wager is not persuasive. Philosophers and theologians have presented many criticisms of it since Pascal's time, but the chief difficulty with it is simple: No one commits to religious belief or unbelief because of a bet. People do not manage their spiritual lives that way.

As a rough guide to risk management, however, the Wager (which is actually an example of decision theory) can be useful. It can clarify issues, and in using it we are forced to make at least approximate predictions about the consequences of our wagers.

Consider its application to climate change. The scientific consensus is that the climate is growing warmer, and that human-generated greenhouse gases—mainly from burning fossil fuels—are a major cause of the change. Those who accept this theory argue for policies that will reduce our production of greenhouse gases. A small number of skeptics argue that any observed warming is part of a natural cycle and not subject to change by human action or inaction.

If our actions can make a difference, then we would want to make some changes in our way of life. For example:

These actions and others we might take have one thing in common: All of them have side benefits quite apart from their effect on climate change. If we burn less fossil fuel, we will be less dependent on oil from unstable parts of the world, and our air will be less polluted. If we improve public transit and drive less, our roads will be less full and travel will become easier even for those who must drive (e.g., ambulances, which will get to hospitals faster). If we invest in sustainable technologies, we can open up new possibilities for economic development and jobs. Thus, even if we have bet wrongly and the skeptics turn out to be right, our world will be a cleaner and better place to live.

If, on the other hand, we bet that the skeptics are right, we need not take any actions to reduce our use of fossil fuels. We might want to for strategic reasons (to protect our economy from disruptions in oil supplies) or because we think reducing pollution is a good thing in itself. But nothing in the skeptics' position compels us to change. We would probably reduce pollution and fossil fuel usage less than if we had bet against the skeptics. Thus, if the skeptics turned out to be right, we would very likely be quite a lot worse off. The planet would still be warming alarmingly, the air would be more polluted, and we would still suffer from traffic jams and oil dependency.

If it turns out that the skeptics are wrong, and we have lived as if they were right, we would face the prospect of greater and faster global warming than if we had bet against the skeptics—and the air would likely be more polluted, the roads more jammed, and our lives far more at risk.

It should be an easy bet to make.