Requiem for the Car Industry 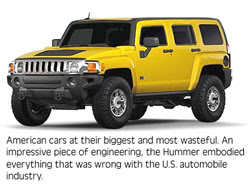 April 3, 2057—The death of the U.S. car industry was drawn-out and excruciating. It need not have been. As early as the year 2000, it was becoming clear that the days of the large private automobile were numbered. Difficulties with fuel supply and environmental constraints had begun to impinge upon the motoring public. Traffic jams, once a minor nuisance for those who lived in cities, had become a daily nightmare for workers and families who could not reach their work, their shopping centers, and their schools without spending hours in their cars moving more slowly than a fast walker or a horse-drawn carriage. U.S. national security had become hostage to a small number of unstable oil-supplying nations, and the might of the U.S. military, as the Iraq War (2003-2010) demonstrated, could not make oil supplies entirely safe. When the U.S. withdrew in disarray from Iraq, driven from the country by the ever-mounting insurgency and popular pressure at home, the oil supply situation reached full crisis point. There was still oil in the ground, but hostile regimes controlled much of the crude that remained.

The American car industry ignored all these danger signals until late in 2007, when its own financial crisis should have forced it to start adapting to the new situation. When Americans needed smaller, more efficient cars, the car industry lobbied against fuel economy standards and invested heavily in large, wasteful sport utility vehicles (SUVs). When state governments, fearing for the survival of their people, tried to set standards for greenhouse gas emissions, the car industry went to federal court to stop them. The states, in their turn, sued to force the Environmental Protection Agency (EPA) to set and enforce greenhouse emissions standards.

In April, 2007, in Massachusetts et. al. vs. Environmental Protection Agency et.al., the Supreme Court ruled that the EPA could and must regulate greenhouse gases. The end of the large, wasteful private car was in sight, though few noticed this at the time.

Attempts to save the private car were many and desperate. Biomass fuel, once thought to be the savior of the car industry, turned out to be impractical: it was not possible to grow enough plant material to fuel the world's automobile fleet without imperiling food supplies. The hybrid car, which saved fuel and had lower emissions than standard cars, provided no solution. The private car fleet was simply too big, and the effort to fuel it and build roads and parking lots for it threatened the planet even when the fleet became far more efficient than it had been in 1985.

With the widespread adoption of carbon taxes, which forced industry and consumers to pay the full cost of the emissions they generated, and congestion charges, which made central cities liveable again, consumers by the millions simply left their cars at home. They sought and demanded other means of getting around, and no longer thought of replacing their cars. This helped to save the planet, but it meant the end of the car industry as it had been through the 20th Century.

Automobile executives could have found other uses for their factories. There was much scope for innovation and profit in designing and building new and more attractive types of public transit, more efficient taxis for the central cities, and very efficient cars for the few, such as farmers, who would be isolated without transport. Instead, the U.S. car industry floundered while foreign manufacturers, particularly the Japanese companies, adapted and produced luxurious buses, trains, and trolleys that lowered both pollution and stress for commuters.

The last Ford plant closed in 2037. It is now a museum. Only a few now remember the automotive era, and most of their memories are not fond ones. They recall traffic jams, fuel costs, and pollution as they cross the streets of their cities with ease and little risk, or ride comfortably from place to place on a fast, nonpolluting trolley. They marvel that people once drove thirty or forty miles to shop or get to work. Those who did not experience the automotive era can visit it in local museums, where they can see old cars on display and hear recordings of the traffic reports that were routine when going to work involved two hours in a car instead of thirty minutes on a bus, trolley, or train.
Posted by rasphila at 3:11 PM No comments: