Strategy and the Planet 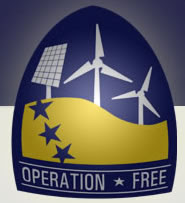 Climate change, with its disruption of traditional farming and living patterns, its effects on food and water supplies, and its economic repercussions, has always posed a strategic threat to all nations. The world's dependence on fossil fuels has also been a problem in its own right, regardless of its effects on the environment. Commentators, including some in the Pentagon, agree that ignoring climate change for business as usual is not just morally wrong, but strategically foolhardy.

A group of retired military officers has now formed Operation FREE, a campaign to present the strategic importance of sustainable energy policy and work toward cleaner energy policies.

In a country where too many members of Congress still talk as if global warming were a minor problem that threatens jobs and may be a hoax, a campaign like this is a significant development. Those who don't listen to the scientific consensus may pay attention to hard-nosed, well-reasoned strategic arguments. Even if they do not, it is good for the rest of us to remember that a sustainable economy is not only the right direction, but the smart direction.