The Best, the Worst, and the Good 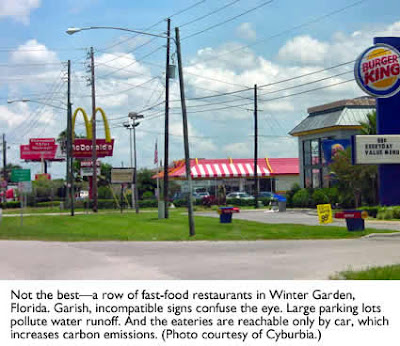 The climate change bill that passed the House earlier this month is predictably full of compromises. Climate change deniers, of whom Congress has more than its full share, wanted no bill at all. House members who supported the bill were under pressure from energy companies, mining interests, and car manufacturers to preserve jobs and industries. The result was a cap and trade approach to controlling greenhouse gases, with givebacks to polluters, that was far from the best it could be.

Cap and trade systems are more complex than the alternative—a tax on carbon—favored by many environmentalists. They are harder to administer fairly and far more difficult to understand. Cap and trade, even without the givebacks in the House bill, is not the best approach to curbing emissions.

With all its faults, however, the bill is an important step forward, assuming the Senate passes it as well. For the first time, at least in the United States, it sets a price on greenhouse gas emissions. Imperfect as its price mechanism is, it will force businesses to consider environmental costs when setting prices, purchasing supplies, replacing equipment, and choosing shipping methods. It will not make as much difference as a more perfect approach, but it will make a difference.

The key here is to recognize that the good is not always the enemy of the best, and to avoid making the best the enemy of the good. The House bill becomes a problem only if we see it as a final policy rather than a step toward a better policy. It can also become a problem if we reject it because it is not the ideal bill. It is better than having no policy, as long as the nation follows it with more efficient and more stringent systems. If there is no followup, then, by encouraging complacency, the good has become the enemy of the best; but it is still better than doing nothing.

This general principle—that we should not let the best become the enemy of the good, and vice versa—applies in many areas. And in all these areas, the worst is usually the enemy of both the good and the best.

Consider land use planning. Better land use is essential to any program to control greenhouse gases. If shops, services, and jobs are not accessible without a car, then Americans will depend on their cars and use them all the time. They will have no choice. The best planning encourages walkable shopping districts, jobs that are within a short walk of home, and public transit connections to shopping and work located further away.

The picture at the head of this article shows the worst, both in design and in environmental impact. The fast food restaurants, each surrounded by its own parking lot, are far from where their customers live. The parking lots complicate and pollute water runoff. There is no public transit in the picture, and probably none for miles (if there is any at all). The highway that leads to these eateries is dangerous for walking and biking. This little complex is a disaster in almost every way: it is a threat to the environment and an affront to the eye, and the food is pretty bad as well (not to mention its own impact on the environment).

The best solution to the problems posed by this complex is to change the incentives so that locating a restaurant in the middle of nowhere makes no economic sense. This is unlikely all at once, but a good first step would be zoning reform to allow mixed land use (shops and offices located near, or even among, houses where people live). This will not satisfy those who think fast food complexes should all be torn down, but in the long run, well-judged zoning reform could rebuild communities and transform them. Zoning reform would begin to change the incentives, even if it did not immediately reshape the community.

The worst, however, is in this case the enemy of the good and the best. In the long run, if we do nothing about places like this fast-food complex—or worse, continue to build more of them—both our good proposals and our best proposals will no longer matter. Climate change and the damage that comes with it will be impossible to reverse or control.

Many people see nothing wrong with miles of stand-alone, plastic eateries surrounded by parking lots. No one considers environmental costs in locating a new MacDonald's or Burger King—or no one has until recently. These attitudes are deeply imbedded in our culture, and they must change. By putting a price on carbon emissions, even a flawed cap and trade system will encourage corporations to ask themselves hard questions about location, food production, and nearly every aspect of their operation. Walkable locations and smaller parking lots will become more attractive, as will locally-produced food products.

This will not be ideal—the ideal would include radical changes in the American diet, for example—but it would be a step toward lower carbon emissions. That is not the best, but it would help us to move in the right direction.

Posted by rasphila at 6:20 PM No comments: 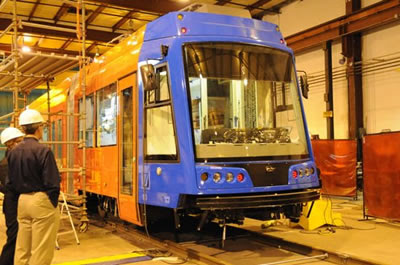 The City Fix reports that a Portland, Oregon, firm has begun producing streetcars—a type of transit vehicle not produced in the U.S. for 60 years, yet common in many other developed countries.

The posting includes links to United Streetcar, the manufacturer, and its parent company, the Oregon Iron Works. Also included is a link to a history of streetcars in the U.S.

Those who think the bankruptcy of General Motors and Chrysler spells the end of transportation-oriented manufacturing jobs in the United States should consult this posting. Converting the U.S. transportation system to a more sustainable model will generate thousands of new jobs to help replace those lost as the older, car-centric model becomes less viable.

Posted by rasphila at 3:15 PM No comments: