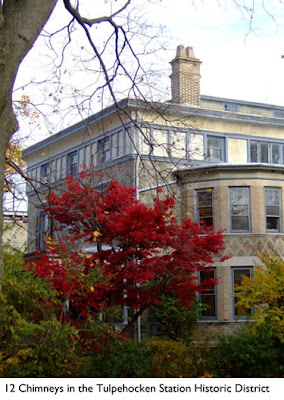 Google Maps was handy for finding a route, but its estimate of travel time was, to put it mildly, overoptimistic. The computer estimated a 27 minute drive. Any driver who has experienced the route, or part of it, myself included, estimates a driving time closer to 1 hour because of expected traffic and adds at least half an hour to that estimate to allow for unexpected traffic.

Getting from my neighborhood to Springfield was an object lesson in why the private car is a very bad people-mover. It was also an opportunity to compare two suburbs from different eras.

My home is in the Germantown section of Philadelphia, just outside the Tulpehocken Station Historic District. This historically certified group of houses, most built in the mid-to-late 19th Century, forms an early "railroad suburb" near the Tulpehocken stop on the local train to Chestnut Hill (another early railroad suburb). For the homeowners who built their houses in the district, the presence of a convenient rail stop was an incentive to settle there. Tulpehocken Station became a kind of transit hub for the district. Houses there reflect the affluence of those who commissioned them, and some of the finest Philadelphia architectural firms designed them. The result is an area that is as attractive as nearly any in the city. The affluent homeowners no longer live in the district, and many of the houses are now divided into apartments. But the district retains its charm. (Here are some pictures of the area.)

The district and the neighborhood surrounding it are handy to shopping areas, medical offices, and schools. Most addresses in the area score 85-90 (highly walkable) on walkscore.com—which means that residents need not drive in order to have access to shops, services, and restaurants. Walkability like this is one of the virtues of many city neighborhoods, and so it is with the Tulpehocken Station district area.

I set out from my home just after lunch, and almost immediately ran into the expected traffic. To get from Germantown to Springfield, there are only two practical routes. One follows U.S. Route 1 (called variously City Avenue and County Line Road). The other uses Route 76, the Schuylkill Expressway. Both routes are notorious for heavy traffic at all hours. The Expressway has, with some justice, acquired the nickname "Surekill Crashway," so I chose Route 1.

Route 1 is also not a particularly pleasant drive. It has stop-start traffic most of the way, and it was laid out by a series of township governments who had quite differing ideas about turning lanes and traffic lights. Most people who use it regularly are very relieved when they turn off to get to their final destination. So was I when Google Maps' directions took me away from Route 1 and into a series of back roads through an area of Springfield that, judging by the architecture, had been a suburb in the 1950s and was now well-settled and older, but still well-maintained and well-off.

It was a pleasant drive through an area that was clearly designed during the ascendancy of the private automobile. I saw no bus stop signs and only one light rail station in four miles of driving. The houses were more attractive than those in most subdivisions, though not quite as elegant as those near my home. Some were surrounded by woodlands, which gave them almost a fairy-tale quality.

But getting food, medical services, and laundry detergent required a car. The nearest shopping location was just over a mile from the edge of this suburb, and it was a mall that was closed for refurbishing (which these days is often a euphemism for closed permanently). The only school I passed was out of walking range of most of the homes in the neighborhood. A typical address in this area returns a walkscore rating of 35-40 (not walkable). Rising fuel prices and diminishing supplies will not be good for this neighborhood. Whether it will adapt only time will tell, but it is not well-situated for an era of limited resources.

I completed my business in Springfield and set out for home again. The pleasant suburb I had passed through earlier was the best part of the return journey, which provided yet another lesson in the defects of the private car as people mover. With less than five miles to go on Route 1, I learned that ahead on my route there had been a major accident. Traffic, which was now at rush hour levels, was so stalled that I managed less than half a mile in twenty minutes. Home began to look very good.

Once I had returned the car to its PhllyCarShare pod (parking space), I walked home. Germantown's economy has many problems, but as I walked I realized that, with a very short detour, I could get food, and without detouring at all I could get a fresh vegetable at the corner store a hundred yards from my house. I could walk to the shops. I did not need to fight traffic, use fuel, and maintain a vehicle in order to cook supper. I was grateful for that. 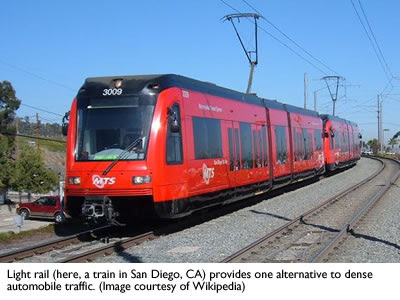 The City Fix, an excellent blog on cities, has just posted two major articles on transportation policy. One, Call for Wholesale Reform, Not Just Reauthorization, of Transportation Bill, is particularly timely with so much stimulus money going to infrastructure repair.

The second posting is a summary and link to a good overview of transportation policy posted on the WorldChanging blog.

Both items are well worth reading.