One doesn't expect creative policy from a Bush Administration that gave us the Iraq War and the military "surge." But the President's energy proposals, made last night in the State of the Union speech, have reached a new creative low. After all the hoopla about initiatives, his actual proposals were simply recycled nostrums that he has proposed before—albeit with minor differences. Last January we were exhorted to reduce our dependence on foreign oil by switching to more economical vehicles and biofuels. This year we are supposed to reduce our gasoline consumption by twenty percent over the next ten years. We will do this by switching to more economical vehicles and biofuels. This time the government will help by making fuel economy requirements a bit more stringent. And it will itself move toward more economical vehicles and biofuels.

Proposals that made little sense last January make even less sense this year. Even on their face they are inadequate. If we merely cut our gasoline consumption by twenty percent over the next ten years, this will not make us energy-independent because there is not enough oil in U.S. territory to supply what we will still be using. Conservation at this level would barely make a dent in our dependence on foreign oil. And a twenty-percent cut in gasoline consumption will do virtually nothing about climate change. For that, the cuts must be far more stringent, and they must include all fossil fuel usage, not just gasoline usage. Mr. Bush's conservation proposal would make us feel as if we were achieving real economies without actually requiring us to do anything meaningful.

Even the ethanol numbers don't add up. The boom in ethanol is good for corn growers and possibly for the American waistline because corn refined into fuel will not be refined into fructose and added to the food supply. But even a mainstream economist like Robert J. Samuelson argues that we just cannot grow enough biological material—corn, switchgrass, wood chips (wood chips?), whatever—to feed our cars.

I emphasize wood chips above because plans to use them reveal the absurdity of plans for a mass switch to ethanol. At the moment, most wood chips used for biofuels are sawmill waste that we would generate anyway and are recycling. But if we switch to ethanol on a large scale, we may find ourselves needing additional sources of wood chips. As we have done with corn, we may be tempted to create wood to use as chips for fuel.

We can't, of course, create wood. Unlike money, wood chips grow on trees. They don't just appear magically out of nowhere. Trees, even those planted for harvest like Christmas trees, take time to grow. Big old trees, the most abundant source for wood chips, take years, sometimes hundreds of years, to grow. How far will be be prepared to go just to keep our cars running? Are we to strip our old-growth forests just so we can continue to drive everywhere? Substitute trees for food crops so we can do our banking from our cars? And how will cutting down trees to fuel our cars help to reduce global warming?

The answer to the last question is simple: It won't. Using trees to fuel our cars can only increase deforestation. That is a step toward, not away from, global warming.

This is not policymaking at all. It is, like the military surge, an attempt to distract us from the real problem, which in this case is our dependence, not on foreign oil, but on the private car. No one ever got elected by telling the people that they should take the bus or the train—or walk. But somebody must begin to do so. Obviously, Mr. Bush is not that person.
Posted by rasphila at 12:50 PM 1 comment: 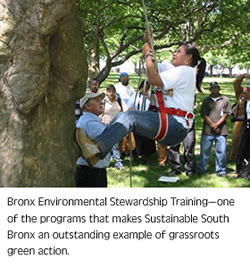 To rebuild for the future, we have to start somewhere. An individual can change his or her behavior, and that is all to the good. But individuals by themselves can change little without organizing—to pressure policymakers, to stop ill-considered and harmful developments, and most important, to change our institutions in a positive way.

In cities, the best vehicle for organizing is the neighborhood. People in the neighborhood know each other, they share a common interest in the welfare of the community, and if something is wrong with the environment in their area, they can sometimes literally smell it.

That was the case a few years ago in the South Bronx. It is less so now, thanks to one of the most exciting grassroots environmental efforts in the country: Sustainable South Bronx. Founded by Majora Carter, who grew up in South Bronx when it was, quite literally, New York's dumping ground, this organization has helped reverse the decline of the neighborhood and created hope where before there was the smell of rotting industrial waste. It is a group that more than repays study and a model for similar groups everywhere.
Posted by rasphila at 2:39 PM No comments: