California Cuts Back and Grows 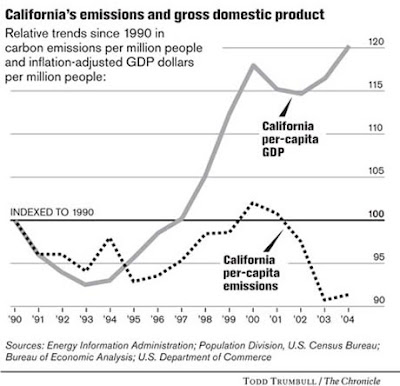 One of the standard arguments against cutting greenhouse gas emissions—cited by opponents ranging from right-wing talk show hosts to the Bush Administration—is that making the necessary changes will damage the U.S. economy. Supporters of change often point to the economic opportunity offered by investment in green technologies and refitting our society for the future to argue that the opposite is true, that a sustainable society can also be prosperous.

Now there is evidence that the opponents of change may be wrong and the supporters right. The San Francisco Chronicle reported in an article on November 14 that since 1990, Californians had cut their per-capita greenhouse gas emissions by nearly ten percent, while their per-capita gross domestic product had continued to grow. Which is to say that Californians cut back and continued to prosper. Because California's population grew during this period, their overall emissions did not drop—but the news is encouraging nonetheless.

In the long run, our growth-based model of prosperity will become unworkable. It could not be otherwise in a world where resources are finite and the environment can no longer absorb the waste we put into it. But the California experience at least gives some hope that by moving to sustainability we will not make ourselves poor.
Posted by rasphila at 10:25 AM No comments: 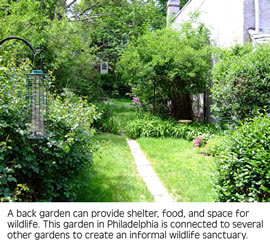 Cities have a bad reputation. It is in the city that crime rates are high and the streets are dark and forbidding. In modern mythology, the city is the place of Metropolis, Batman, the Godfather gangs, shootouts, drug lords, and the nightmare landscape of Escape from New York. It is a terrible, inhuman place, a place to leave for the clean air and safe surroundings of the countryside.

There is a good deal of irony in all of this. The clean and safe surroundings of the countryside have become the sprawling suburbs of big box stores, acres of parking lots, unwalkable streets, and traffic jams. And the cities have begun to take the lead in promoting a sustainable way of life. Here are three recent examples:

The irony is that cities, for all their bad reputation, have always had the potential to be sustainable in ways that standard American suburbs could never be. And as they become sustainable, they will almost certainly become livable in ways that would surprise the people who fled them for suburbs that are becoming less viable with every increase in the price of gasoline.
Posted by rasphila at 5:25 PM No comments: