Hip Deep in the Big Muddy 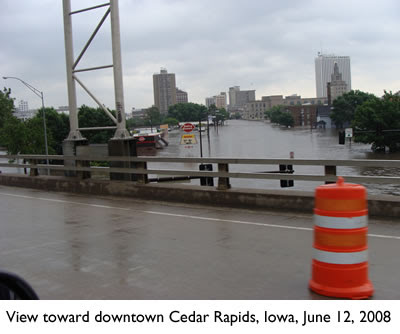 It is curious how much two disasters can have in common.The most recent, the midwestern U.S. flood of 2008, is an affliction on a scale that is difficult to comprehend. The second, much smaller but catastrophic nonetheless for those affected, is the almost annual river flooding in Bucks County, PA.

The common element for both is the way that misguided (or nonexistent) land use planning helped pave the way for calamity.

Joel Achenbach, a staff writer for the Washington Post, presents impressive evidence that a combination of farming and residential development on flood plains, wetland drainage, and manipulation of the water table contributed to the flooding and very likely made it more severe than it might otherwise have been. Without heavy spring rains, there would have been no flood. But even with them, human mistakes had helped to prepare the way for the catastrophe that did in fact happen.

It would be unfair to blame the farmers for the disaster. Farming is a hard, precarious profession. Farmers have little choice: they must grow what is profitable, and they need land to grow it on, even if that land is a wetland that should never have been drained.

Developers who build on flood plains and create subdivisions from farms bear some responsibility—but not all. The American style of residential development is based on profligate use of the land, but land use decisions, like decisions about draining wetlands, are matters of public policy. Better policies might have saved enough wetlands and farmland to make a difference.

The best way to minimize floods and their human consequences is thoughtful, informed land use planning. If our planning is flawed or—as is sometimes the case in the U.S.—we have no effective planning mechanism at all, there will be consequences. And those who pay will seldom be those who made the policies.

Consider the plight of riverside residents in Bucks County, Pennsylvania. For years, going back to the 1950s, local governments in Bucks County have been helping the county's economy to grow by approving projects that pave over land for shopping malls, destroy local farms to build suburban subdivisions, and put parking lots almost literally everywhere in the county. This has meant problems with water runoff, which in turn has made flooding on local rivers more likely—and entire towns close to the rivers have suffered.

In Iowa, Missouri, Wisconsin, and, on a smaller scale, Bucks County, residents are suffering because in the United States we have traditionally regarded land use planning as suspect. We must do better in the future.

(For some suggestions about land use planning, see the third of my series on dead space and suburban development.)

Posted by rasphila at 4:54 PM No comments: 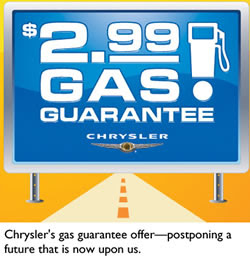 Everybody in the United States is in a lather about fuel prices. Airlines are scrambling: they are cutting service (for which read personnel), charging for services that once were free, and passing fuel surcharges through to customers, just to avoid losing money. Two of the three candidates for U.S. President advocated a summer Federal gas tax "holiday" which, economists universally pointed out, would not save consumers any money and might raise the price of gasoline in the long run. Automakers like Chrysler, suddenly unable to sell the SUVs and trucks that had become their staple, are now offering protection from gas price increases. Finding the best gas price has, in fact, become a cottage industry, with new Web sites springing up every day.

Little of this is surprising. Americans have lived with cheap transportation fuel for so long that life without it is inconceivable to many. Worse, we, more than any other developed country, are unprepared for fuel costs which, in the long run, will go up, not down. We fly and drive everywhere, and until recently, fuel economy (let alone the effect on the planet) was not a factor in planning and transportation decisions. Now we have few alternatives, and our failure to provide them will make the transition to a future of fuel economy and high fuel costs that much more painful.

Consumers, showing more common sense than many politicians, have begun leaving their cars at home, consolidating car trips, and using public transit, according to a recent Washington Post report. The increase in ridership in Philadelphia is somewhere between five and 10 percent—not enough to bring our fossil fuel usage down significantly, but enough to show a trend that could do this if it keeps up. The problem is that our public transportation, both here and in the rest of the country, is not ready for the increases in ridership that will (and should) come as fuel costs remain high.

Politicians and policy-makers still don't quite get it. Conservatives suggest that oil prices are experiencing a speculative bubble, and prices will go down as market forces act—all of which could be true but would not prevent higher prices as oil becomes more scarce and harder to extract. Liberals attack the oil companies for enormous profits—which they certainly have made in the past few months. The problem is that attacking the oil companies will not prevent oil from become harder to find because there is only so much oil in the ground in the first place. To adapt to a future of expensive oil, we have to stop living as if cheap fuel is a human right. This means investment in old infrastructure like railroads, and new ideas like light rail and alternative energy. Many politicians, however, still insist that building roads is an investment, while funding public transit is a subsidy.

A future with cheap oil is not on offer. Nor, unless we want the earth to become uninhabitable, is a future based on massive use of fossil fuels. Whether we can get to a future that is not based primarily on fossil energy is the central question of our age. We will not do so by giving ourselves gas tax holidays, inveighing against the oil companies, or deceiving ourselves about the nature of the problem.

Posted by rasphila at 1:22 PM No comments:

The Lieberman-Warner Climate Security Act will mark the first time that a climate change bill has been debated in the Senate since 2005. Kate Sheppard of Gristmill gives a good summary of the bill, its history, and its strengths and weaknesses. It is not the strong bill that we need, but it at least acknowledges that there is a problem. Sheppard's lucid summary is well worth reading.

Postscript June 11: Threats of a filibuster by opponents of the Climate Security Act prevented the bill from reaching the Senate floor.
Posted by rasphila at 6:14 PM No comments: