Design for What? Second of Three Parts 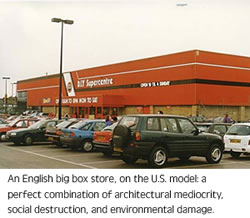 The problem with designing a building is that it is a lasting monument. If it is beautiful, works with its surroundings, and moves us toward a better future, we will enjoy it for a long time, and it will help us to live better. If it is mediocre, ignores or destroys its surroundings, and lessens the prospect of a better future, we may tolerate it, but we will not love it—and in the end, when it has outlived its usefulness, we will have the problem of what to do with it.

All over the United States there are buildings like the big box store in the photo, the shopping mall outside of town that has effectively destroyed the central business district, and the office park that might once have been located in the city center. All are surrounded by acres of parking lots which damage water runoff, speed climate change (both by encouraging more cars and more driving, and by paving over farmland and green areas), and create traffic congestion. But in the suburbs, where most big boxes and office parks are located, parking, however ugly and destructive, has up to now been a sine qua non—an absolute necessity because shoppers and workers must drive their cars to reach the big box that is their destination. They have no alternative.

Older cities like Philadelphia provide alternatives to the private car. Public transit in Philadelphia is inadequately funded, does not run frequently enough, and follows routes that are often based on a city that once was, not the city that exists—but it is there, and it is quite possible to live in the city without a car at all. The difficulty for city planners is that the city needs to attract suburbanites for shopping, events, and jobs if it is to thrive. And suburbanites are not only in the habit of driving everywhere, they actually fear the city (any city, not just Philadelphia) at night. Or at least they fear the process of getting to and from downtown, or find it inconvenient,

In fact, it is inconvenient to drive from the suburbs to downtown, not because of parking but because of traffic. The local news in every city in the United States, not just Philadelphia, has regular reports on traffic jams—a daily crisis that everyone regards as normal even though it plainly is not. Hearing these reports, I regularly wonder why people subject themselves to the torture of driving to the city. The train is leisurely, comfortable, and quiet. It seems expensive, but compared with driving it is not. But there are few trains, they run at awkward times, and they stop running too early. Hence the choice of the slow, unpleasant, noisy, expensive drive to town.

Which brings us back to the proposed parking garage at one of the busiest intersections in downtown Philadelphia. From an environmental and social point of view, a ten-story parking garage like the one proposed is hard to justify. Less diplomatically, it is a disaster. It uses precious city space that could house offices or residents to house cars. It encourages driving to the city, and its location will inevitably increase traffic congestion.

That is the case against the proposal. The case for it is that the city "needs more parking" if it is to attract business from the suburbs. The real question, however, is whether, in the long run, the city will need more parking or better and more efficient access to its events and services. More and more parking seems important for the next five or ten years. But during those years, the price of fuel will go up, the supply will almost certainly go down, and the need to discourage driving (because of climate change) will become even more apparent than it is now. In the long run, the suburbs themselves will have to change or face ruin as the sheer cost of living in them and supplying them grows beyond what those who live there can sustain.

Given a long term in which suburbs become less viable (unless they also change), should city planners approve parking whose importance will probably diminish after five or ten years? And in any case, is a parking garage on one of the most important parcels of city land a good choice? More on this in the third posting of this series.
Posted by rasphila at 11:20 AM