A View from the Maine Coast: Heartbreaking Beauty, Uncertain Future 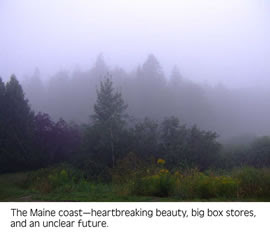 The Maine coast, where we spent a month this summer, is a place of heartbreaking beauty—quiet coves, massive rock formations, silent woods, osprey nests, and hills with views of Nova Scotia and Massachusetts. Even in fog, it resembles a painting of an ideal world.

A closer look, however, reveals a more troubling picture.

To be fair, Maine is one of the most environmentally conscious of states. Organic milk and produce are easily available and inexpensive. Producers donate part of their profits to environmental causes. State and federal wildlife preserves are filled with waterfowl, small and large mammals, frogs, and freshwater fish. The lobster fishery, though still imperfect, is better managed than it was even ten years ago. Farmed Maine mussels are the envy of the world for taste, cleanliness, and protection of the environment.

All this is true, but twenty-five miles inland, the standard America of highways, parking lots, big box stores, sprawling development, and automobile dependence is taking over. From Winter Harbor, where we stayed, it is a twenty-five mile drive to Ellsworth, the biggest town in the region. There is a bus, but it runs too infrequently to be a practical alternative to driving. Even to get to this part of the Maine coast is difficult without a car. The railroad that used to serve the area is derelict and scheduled to be converted to a hiking trail.

Ellsworth itself is an interesting place. Just outside of town there is a shopping area consisting of two large groups of stores with acres of surface parking and traffic that baffles even experienced local drivers. At one end of the shopping complex is a Home Depot, with attendant parking lot, which is still controversial because of its effect on local hardware dealers. Nearby is a new Wal-Mart (with attendant parking lot) whose effect on local supermarkets is still being debated.

There is no debate about how all this affects traffic and water runoff. Both are worse because of the shopping district and the two new big box stores. The line to enter the Wal-Mart parking lot sometimes extends for a mile. Heavy rains routinely flood the main road from the north into the town.

Downtown Ellsworth remains compact, walkable, and, with larger shops moving to the outskirts of town, full of ideas. It has become a place of restaurants and innovative specialty shops. This is good for local residents and tourists alike, but it comes at a very high cost in traffic and pollution less than a mile from the center of town.

These developments are not the fault of the people of Maine. They know that the state will not retain its magic without measures to protect its environment. But until recently our society also presented them with a single development model: to prosper, a town needed parking, national chain stores, and ample provision for traffic.

This kind of prosperity made Bar Harbor (and Mt. Desert Island where it is located) one of the most polluted towns on the East Coast. A free, low-emissions bus service funded by L.L. Bean has helped to reduce pollution on Mt. Desert and in the main part of Acadia National Park, which is located on the island. But there is no free bus service to Ellsworth—there is not even a regular bus from Boston. And the trains are long gone.

The beauty and calm of coastal Maine is still there, to be sure. But it is an open question how long it will remain if we do not begin to implement more sustainable ways to prosper. There are development models—walkable shopping districts near public transit hubs are one example—that avoid the big box store and the massive parking lot. We must begin to use them.
Posted by rasphila at 9:57 AM No comments: