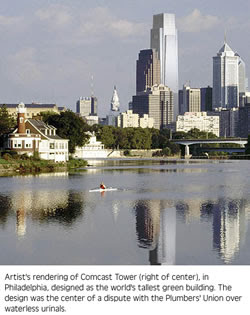 In one episode of Yes, Prime Minister, the British political satire, the Prime Minister tells his cabinet that "every problem is also an opportunity." His Cabinet Secretary, a high-ranking civil servant, then observes that the cabinet must beware of creating "insoluble opportunities."

It is a wonderful exchange, and it tells us a lot about ourselves and the debate over climate change. Mainstream commentators no longer doubt the reality of climate change, but they see only problems in trying to cope with it. Cutting greenhouse gas emissions, it is argued, would do enormous economic damage, especially cutbacks at the levels recommended by scientists and the United Nations in its latest report. It is fraught with problems, so we cannot do it—or at least not at the recommended levels.

But, as the Prime Minister observed, every problem is an opportunity. Not every problem has a solution, but every problem gives us a chance to think anew about how we work, play, travel, and live our lives. And we may never cut back our emissions as much as we would like, but the effort to do so—to rethink our approaches—can lead us toward a better world even if we are not entirely successful.

Consider the problem of buildings. Buildings are one of the major sources of greenhouse gas emissions. They are also one of the areas where change means opportunity, not privation. Retrofitting old buildings for more sustainability; designing new ones with smaller carbon footprints; even simple actions like installing insulation in old houses—all of these measures involve investment, money, and jobs. They are not insoluble problems, but soluble opportunities.

The central problem with buildings is not the technology. Architects already know how to build more sustainable buildings and refit old ones, and over time they will find better ways to do so. The central problem is with ourselves, and the saga of the Comcast Tower in Philadelphia is a good example.

The Comcast Tower was designed to be the world's tallest green building. Among its features was exclusive use of waterless urinals, a new technology that is known to save tens of thousands of gallons of water over time. The Philadelphia Plumber's Union, which has a great deal of political clout, objected. The objections delayed construction on the building and threatened to undercut its green certification. The problem, according to the plumbers, was that waterless urinals would result in less work for members of the union. They were a problem—not an opportunity.

The plumbers were trapped in old thinking. It is perfectly true that installing waterless urinals takes less time (and is therefore less lucrative) than installing conventional ones. But waterless technology is the future; conventional plumbing is the past. The Plumber's Union failed to see the opportunity to master a new technology which, in the long run, would preserve its members' jobs as new buildings adopted the new urinals and older ones converted to them. If Plumber's Union members would not install the technology of the future, someone else would. Failure to adapt, as in most situations, would mean failure to thrive.

A more sustainable society need not be a society in economic collapse. It could be a better place to live than our current world. But we will not see this, let alone achieve it, if, like the Plumber's Union, we fail to see that every problem is also an opportunity.

Eating for the Planet 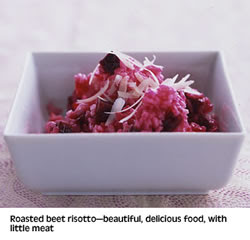 In 1971, Frances Moore Lappe's Diet for a Small Planet argued that modern agribusiness practices and the Western meat-centered diet were wasteful and impractical in a world with a growing population. Lappe has since modified some of her dietary theories and begun to emphasize inequities in the food distribution system as a major cause of hunger. But one central assumption of the book still stands—more firmly now than in 1971: Our methods of food production and distribution and our diet preferences have major effects on the environment.

Thirty-five years later, the questions are different. Hunger remains an issue, but we now know that our food production and distribution are major contributors to the increase in greenhouse gases. Livestock—chiefly beef and dairy cattle, but other livestock as well—account for around 18% of greenhouse gas emissions worldwide, according to the Livestock, Environment and Development Initiative (LEAD). This figure includes the effects of deforestation to raise livestock, transportation, production of feed, and gas created by the animals themselves.

LEAD suggests that better farming methods and better animal feeds could mitigate many of the problems created by livestock. But greenhouse gases from livestock are only part of a larger problem in the developed world: the production and distribution of food itself. In the United States, much of our produce comes from California and Florida, usually by truck, at enormous cost to the environment. Much of it is nourished by artificial fertilizers, produced and transported at enormous cost to the environment.

Some of this would be hard to avoid even in an ideal world. Staple grains will not grow everywhere, for example, and need to be transported somehow from the places where they will grow to the places where they will be eaten. But, even in the era of sprawl, the United States still has a lot of good farmland where livestock could be raised more humanely and less destructively than at present—and where both livestock and produce could be farmed nearer to where consumers live.

Raising livestock and produce more naturally and locally would not only benefit the environment. It would have health and taste benefits as well. Naturally-produced hamburger, for example, is more expensive than the standard McDonald's variety. But it is less likely to give you e coli infection or mad cow disease, and it tastes better than the bland stuff that passes for beef in fast food restaurants. Local produce almost always tastes better than produce from across the country because it is fresher. And it is likely to be more nutritious, again because it is fresher.

It is easy to see that if we ate less meat and more vegetables—as the U.S. government itself has recommended—we and the environment would be healthier. What is not so obvious is that we would also be eating more enjoyably and more traditionally. The great cuisines of the world—French, Chinese, Italian, and hundreds of others—have never centered around 16-ounce servings of beefsteak. They are not vegetarian, but by using fresh ingredients and cooking them with care, they can produce delicious and healthful meals using far less meat than is standard on American tables. Huge servings of meat are not even traditional in the U.S. Many of our classic dishes, like Boston baked beans, were designed to stretch meat when it was a rare and expensive commodity. Some, like macaroni and cheese, contain no meat at all.

Healthy, delicious, and good for the environment—a combination that is hard to beat when talking about food. Those who look for good ingredients and cook them with respect will never miss McDonald's. They may even wonder why they ate there in the first place.
Posted by rasphila at 9:50 AM No comments: