Alison Arieff's latest By Design column gives a good summary of possible solutions to the problem of water. Well worth reading.
Posted by rasphila at 8:30 AM No comments: 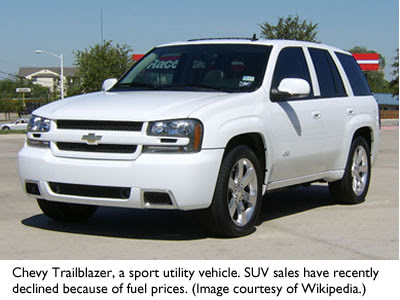 As anyone who follows the news knows, the United States automobile industry is in trouble. Sales are down, particularly among sport utility vehicles (SUVs), which appeared to save the industry for a few years and are now killing it. So the Big Three, Chrysler, Ford, and General Motors, are seeking a government loan. Ford claims that it has enough cash to keep going, but supports the bailout because a General Motors bankruptcy, which is the most likely, would devastate the industry, threaten the livelihood of auto parts makers, and worsen an already grim economic situation.

There is no doubt that a sudden collapse of the auto industry would be ruinous for auto workers, parts suppliers, and the general economy—though perhaps less so for top management at the Big Three, who arrived in Washington separately in private jets and would no doubt escape the wreckage with very fat wallets, as did the CEOs of Hewlett-Packard, Lehman Brothers, and various hedge funds before them. The major question, which Congress is right to ask, is whether a bailout would merely reward bad management without changing a badly-flawed industry very much, if at all.

The auto industry's problem has little to do with costly union contracts and pensions, although these are favorite scapegoats among conservative commentators. A thriving, far-seeing, and innovative industry could pay the contracts and pensions and still make money. But an industry which has tried to thrive by fighting fuel economy requirements and basing its future on SUVs and pickup trucks is neither far-seeing nor innovative. The car companies have used more ingenuity in blocking and trying to avoid fuel economy legislation than they have in adapting to a world with limited and expensive fuel supplies.

It is as simple as this: Oil, which fuels the automobile fleet, is becoming harder to extract and will be more expensive in the long term. Americans are driving less, and many who were interviewed by news agencies intend to drive less in the future even if the price of gasoline comes down because they know the price drop will be temporary. Fuel economy, not size or power, is the new standard for judging cars.

Climate change also factors into buying decisions for many Americans. This reinforces the need for fuel economy and will make low-carbon cars, if they come on the market, very popular.

On fuel economy and low emissions, American car makers have done little or nothing. They did not, for example, develop hybrid technology. They fought gas mileage regulations. They concentrated on building and selling SUVs, which, because they are built around a truck chassis, are technically trucks and not subject to the same requirements as passenger cars. Now General Motors has discovered hybrids, electric cars, and hydrogen-powered vehicles. But they made little or no effort to do so in the past twenty years.

There is a larger problem, not yet discussed, that will become urgent in the long run: The private car as a major people-mover is beginning to see the end of its days. It is simply too expensive and inefficient to remain the transportation of choice much longer. Already, public transit in the United States is seeing large increases in ridership, which it is ill-prepared to handle because we have starved it of resources. Over the next 20-30 years, as fuel becomes even more expensive, this trend is likely to continue. We will still have cars, but they will not be the main part of our transportation system.

There is no reason why car makers cannot adapt to this situation by diversifying into public transit vehicles, but the Big Three have not done so. Instead, they have behaved as if oil is a renewable resource and the chief problem facing them is increasing sales.

Bailing out the car industry in its current form would reward not only bad management, but a disastrous vision of the future. Instead, Congress might consider a different financial aid package that would encourage the car makers to innovate, help displaced workers, and build for a long run in which we must use less fossil fuel. Some elements of that package might include:

These measures, even taken together, would not solve all the problems of the auto industry or transportation in the U.S. But they would be a start. Whether the Congress has the vision to consider them or something like them is another question—and perhaps the most difficult of all.
Posted by rasphila at 10:30 AM No comments:

What to Do with a Big Box Store 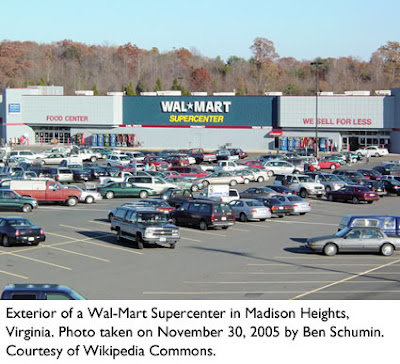 If you set out to deliberately build an unsustainable retailing structure, you could hardly do worse than the big box store. Unattractive, surrounded by acres of parking lots, and closed off from the outside world, the big box store comes close to violating every rule of sustainable and beautiful building. It is a sad legacy of the move to the suburbs.

It becomes even worse when it fails. Stores close, developers abandon it and move on, and it becomes a ghost. (See the three-part series in this blog on Dead Spaces: Part I; Part 2; Part 3.) The ghosts of big box stores complicate water runoff, contribute to climate change even when no one uses the parking lot, and are even more ugly than their live big box cousins.

In the long run, the big box store will almost certainly succumb to rising fuel prices and environmental constraints. The major question is what to do with the buildings and parking lots that remain when a big box store is abandoned. Tearing it down is one possibility, but this is both unimaginative and (because of the building materials used in most big box structures) hazardous to the environment.

Now the Washington Post has assembled a team of artists, architects, engineers, and developers to come up with creative suggestions for recycling these dead spaces. The article by Joel Garreau, repays study. The Post's team has some imaginative suggestions, with artists' renderings that bring them to life.

One doesn't have to agree with all the suggestions to see that this is a good start toward resolving an issue that we face even as I write and will face more urgently in the future.

Posted by rasphila at 1:30 PM No comments: