How We Got into This Mess 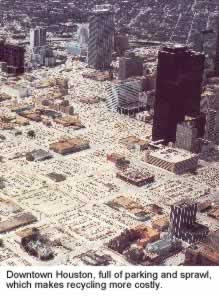 The July 29 edition of the New York Times includes an article on recyling in Houston, TX, that gives a capsule demonstration of how we got into our environmental mess, and the barriers to fixing it.

Houston recycles 2.6 percent of its waste, as compared with other cities like San Francisco (69 percent) and New York (34 percent). As many as 25,000 Houston residents have been waiting ten years for city-provided recycling bins. And city officials are not optimistic: Houston is too sprawling for efficient recycling collection, and its citizens are too independent to accept recycling requirements easily.

Houston is sprawling because its planning system effectively encourages sprawl and because nearly every city planning function is subordinate to the need to move automobile traffic and park cars. Its downtown is a wasteland of tall buildings in a dead zone full of parking lots. It is LeCorbusier's vision of high-rise buildings in a park; but the park has become instead a paved-over nightmare, and after dark the streets are empty.

The city of the future? Not quite, but Houston's problems remind us how far we have to go, and how hard it will be to get from here to there. In Houston, we have met the enemy, and he is us.

Posted by rasphila at 3:09 PM No comments:

Walkscore.com has released its list of the ten most walkable cities in the United State, including a couple of surprises. The list, in order, is:

The site evaluated 40 cities using its walkscore calculator. At the bottom of the list, from least walkable to slightly more walkable, were:

A little over 18 months ago I posted a critique of President Bush's State of the Union message and its emphasis on increased use of biofuels, particularly ethanol. Unfortunately, the posting lumped ethanol with biofuels made from wood. This was incorrect, as commentator sverdalov reminded me:

Please do not insult those working on the development of wood to biofuels (ethanol is the presidents favorite, not theirs) or their choosen feedstock. Wood is a renewable resource when managed properly as the US forest products industry has learned to do. High yields (measures in tons/acre/year) can be achieved with a great deal of success. Also, the use of wood does help with global warming, as the net CO2 to atmosphere is 0, as the trees will regrow, recapturing the CO2. Further, since non-fuel products are likely, some of the carbon captured would be in the form of products (such as plastics) to be sold to the consumer. This would aid in decreasing CO2 in the atmosphere.

I stand corrected on the use of wood for biofuels. The larger point, made in this and other postings, is that biofuels will not spare us from the need to become less dependent on the private automobile and improve our public transit. Private cars are the least efficient way to move people, no matter how they are fueled. We have to do better at providing alternatives.

I am grateful to sverdalov for this correction.

Afterword, July 28, 2008: Commentator Marshall Massey reminds me that trees are a precious resource and not to be used lightly to create products like biofuels which, at bottom, only facilitate inefficient transportation like the private car. He is correct. If this contradicts what I said earlier in this posting, so be it. I believe, with Emerson, that the search for perfect consistency is "the hobgoblin of little minds" and can often impede the search for truth.

In my reading, sverdalov was defending wood-based biofuels and criticizing me for lumping them with corn-based ethanol. His critique was correct to that extent, and I still accept it. The larger question is whether we should be expending effort and money on biofuels at all. sverdalov's original comment did not directly address this policy question. I agree that wood-based biofuels are different from and less harmful than biofuels based on food crops.

On the larger question of substituting biofuels for gasoline, I was not explicit enough. Our problem is not how to fuel our cars; it is how to use them less, or not at all, and still retain that freedom of movement which is one of the hallmarks of a free society. A change in the fuel mix does not and cannot address that problem. Creator Spirit, come.

(See the related article, Requiem for the Car Industry, for one possible scenario on the fate of the private car.) 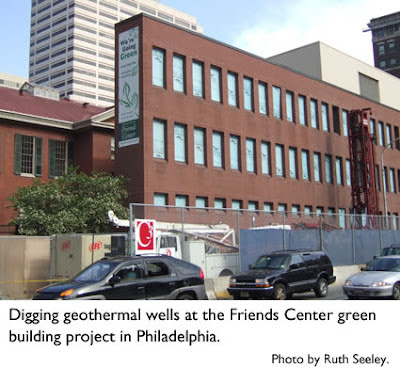 Carbon offsetting, in which individuals, households and corporations "offset the carbon emissions [their] lifestyle generates by funding projects that reduce carbon emissions" (Consumer Reports, March 2008), have become increasingly popular lately. Offsetting seems to offer an accessible way to reduce emissions beyond what is possible by individual conservation alone. In principle, it is a helpful idea. In practice, there are traps for the unwary.

The system seems easy and painless. A family or corporation calculates its carbon footprint (the emissions it generates annually). This is theoretically easy to do using one of the many online carbon footprint calculators. Most calculators—which are in effect fundraising devices—assign a dollar amount per ton to carbon emissions. The user donates this amount to the organization which provided the calculator, and the money goes to projects that are supposed to lower the worlds's overall emissions, usually low-emissions power projects, conservation projects, or reforestation projects.

The difficulties with this approach, although they do not necessarily invalidate the idea of offsetting, should lead us to approach it with care:

Despite the difficulties, carbon offsetting has in fact raised capital for low-emissions energy and conservation projects—and reforestation, whether or not it sequesters carbon as its advocates claim, is desirable in itself for many reasons. The problem with offsetting is not the concept itself. It is finding the best way to implement it.

Here is one approach that seems reasonable for a small household. First, calculate the household carbon footprint using a good online calculator. The suggested donation will vary with the organization providing the calculator, and in any case, one household may be able to give less, another more. The simplest way to proceed is to use the suggested donation as guideline. One can only do what is within one's power to do.

The keys to this approach are

Our family's particular project is the Friends Center's green retrofit in Philadelphia. In the United States, buildings are the third largest source of greenhouse gases after the industrial and transport sectors (EPA figures), which makes green building projects particularly suitable for offsets. The Friends Center was originally a more or less typical energy-intensive 1970s building. It differs from most buildings of its era only in having windows that open, thanks to pressure on the architects from the organizations which built it. Remaking it will save a great deal on carbon emissions even though it is a small building. Supporting a project like this will not, by itself, save the planet. But it is a start.

Official Washington is buzzing with proposals that allegedly would help to bring down fuel prices. The most loudly proclaimed, probably because they make good rhetoric, are permitting offshore drilling for oil, cracking down on oil futures speculators, and giving motorists a "holiday" from federal gas taxes.

All of which sounds good and would achieve precisely nothing. Or worse than nothing.

The obvious way to deal with high fuel prices is to use less fuel. This would make life less expensive. It would also cut greenhouse gas emissions. Using less fuel is a common sense solution which helps in many ways. Unfortunately, it makes for dull rhetoric: Drive less! Ride the train! Use a Bike! Walk to the Store!

For policy suggestions on using less fuel, The City Fix has two recent postings that are relevant. One, "Easing the Pain Caused by High Fuel Prices," includes three practical suggestions for city design and social investment that can help. The second and more recent is a series of photographs of the Beijing subway system, which was built to ease travel at the Olympics but will also help control fuel use and pollution in one of China's major cities.

Posted by rasphila at 5:42 PM No comments:

What To Do with an Old Gas Guzzler 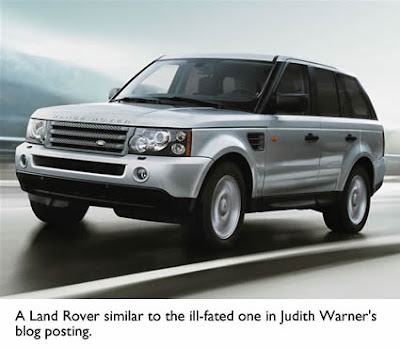 Judith Warner's New York Times blog, "Domestic Disturbances," has a very funny posting on the family's Land Rover, which now sits in the garage except for trips to the local Metro stop, the supermarket, and the gas station—all less than a mile each way.

Warner's speculations about the ways the family might actually use the Land Rover in future are hilarious. A good, short read with a serious point lurking among the laughs.

Posted by rasphila at 5:54 PM No comments:

In contrast to 2007, when the Group of 8 failed to reach agreement on cuts in greenhouse gas emissions, the G8 Summit this year issued a statement calling for a 50% cut in greenhouse gas emissions by 2050. This sounds important, but in fact the situation is not much different from 2007. The goal for cuts is too small, the statement is not binding on member nations, and the agreement does not include emerging polluters China and India. What seemed like a start, however inadequate. turns out on a close reading to be lacking in both substance and force.

Andrew Revkin's New York Times blog, DotEarth takes an extended look at the statement, with an annotated version and a critical analysis. Well worth reading.