The Virtues of Age 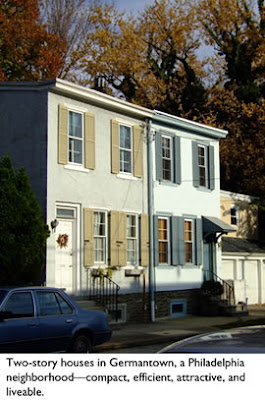 We live on a block and in a neighborhood full of old houses. Most of the houses on our block have three stories; some, like ours, share a wall with another house. Others stand alone. The houses around the corner are all classic Philadelphia row houses—one of the most efficient house designs ever devised.

On our block, the houses differ in design, in distance from the street, and in other ways, but they have much in common. They are not large by modern standards; our house is about 1,575 square feet, much smaller than a typical McMansion (3,000 square feet). None has a garage, although the house next door has a converted carriage house that can shelter a car. All have entrances that face the street and welcome visitors. All have small front gardens.

It is not an exercise in nostalgia, but the literal truth, to say that no one builds houses like these today. In an exchange of letters on suburban housing in a recent Atlantic Monthly, a builder pointed out that because the market favors large houses, developers must economize on material and methods in order to make a profit. For instance, they use sheetrock instead of lath and plaster, and molded plastic windows and trim, because these save money. For a smaller house, fewer shortcuts might be necessary.

More to the point, during the 1950s, 1960s, and 1970s, no one built neighborhoods like the ones that are common in cities. There is a good vegetable store on the corner of our street. Within easy walking distance one can find two drug stores, a hardware store, two supermarkets, a pizzeria, a library, five schools, several medical and dental offices, and two veterinary offices.

Suburban developments have no corner stores, walkable shopping streets, or local schools within half a mile of where students live. They have distant supermarkets and big box stores, shopping malls, and consolidated schools, none accessible to most residents without a car. Hence the two or three-car garage which dominates many modern houses and inevitably raises every family's carbon footprint when they drive to the mall or to school.

The suburban way of life, so dependent on cheap fuel, is nearing the end of its viability. Architects and planners like the New Urbanists are designing walkable neighborhoods modeled on blocks like mine. One does not have to agree with all of New Urbanism to see that they are on the right track. We must live in smaller, more efficient houses, and we need to be able to walk, not drive, to neighborhood amenities.

This is not a radical change, though in a world full of suburban development it may seem so. We already have neighborhoods like this in our cities. The stereotype of the city—that its people are either very poor or very rich—has just enough of the truth to be credible. But it is not the whole story. Many city neighborhoods, like my block, are affordable, pleasant places to live. In the future, we will need more such places.