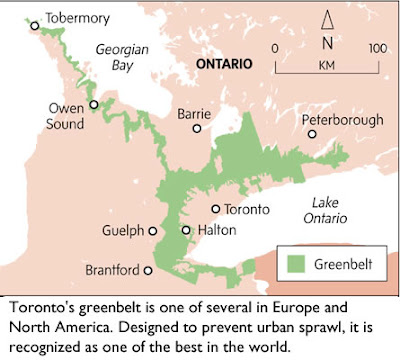 Urban sprawl—the uncontrolled growth of automobile-driven suburbs—has increasingly been recognized as a form of blight. It destroys vital farmland to create tract house developments miles from work, shopping, and even good walking areas. Suburban shopping districts cling to the edges of the highway, each store with its own parking lot, or close themselves from the outside world in shopping malls surrounded by the inevitable acres of asphalt for parking. Sprawl is an offense to the eye, the aesthetic sense, and the planet.

One proposed solution to the sprawl problem is the creation of greenbelts, areas of land closed to development and protected for agriculture, parks, and wildlife. The largest and most creative of these, according to a study reported in the April 9, 2008, Globe and Mail, is the greenbelt surrounding Toronto.

"Ontario's greenbelt is positioned to be the most successful and most useful greenbelt in the world," concluded the study, compiled by the Canadian Institute for Environmental Law and Policy, a Toronto-based think tank.

Commissioned by the Friends of the Greenbelt Foundation, the study compared Toronto's greenbelt with similar efforts in Canada, England, and Europe.

According to the report, greenbelts face at least two major problems: pressure for development, and "leapfrogging" of sprawl over the greenbelt.

So far, the province of Ontario has resisted pressure from developers to open the Toronto greenbelt to sprawl.

"My goal and my mantra that drives me is that we're going to be doing nothing but expanding the greenbelt," Municipal Affairs Minister Jim Watson said in an interview [with the Globe and Mail.]

To avoid "leapfrogging," Ontario authorities hope to expand the greenbelt, in effect doing the opposite of opening the protected land to development.